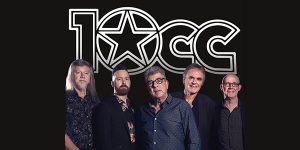 10cc have announced an extra Dublin date due to demand, on 31st May 2020 at Vicar Street, this follows the news of their show on 29th May is sold out. Limited tickets remain for their shows in Ulster Hall, Belfast, 28th May and Cork Opera House, Cork, 30th May.

Among the most inventive and influential bands in the history of popular music, 10cc are one of the very few acts to have achieved commercial, critical and creative success in equal measure.

Testament to 10cc’s ongoing appeal, the band can count a generation straddling array of fellow artists, everyone from Chrissie Hynde to The Feeling’s Dan Gillespie and Axl Rose to Sophie Ellis Bextor, among their many millions of fans.

I’m Not In Love, co-written by Graham Gouldman and Eric Stewart, features prominently in the soundtrack to the 2014 blockbuster film Guardians of the Galaxy, which grossed $635 million in its first two months in US cinemas and spawned a No 1 album. Meanwhile, a key element of the soundtrack to 2010’s Facebook feature film The Social Network is Dreadlock Holiday, which is also the Sky Sports cricket reports theme in Australia.