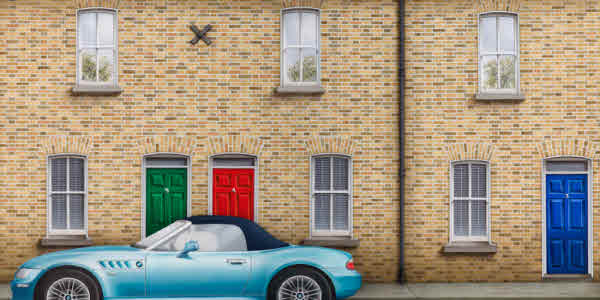 Born in Dublin in 1943, Ballagh studied at Bolton Street College of Technology and began painting in 1967 when he first exhibited as part of the Irish Exhibition of Living Art. His work is represented in many important collections including the National Gallery of Ireland, The Ulster Museum, Dublin City Gallery The Hugh Lane, Crawford Gallery and the Albrecht DŸrer House, Nuremberg.

For 10 years he chaired the Irish National Congress, a non-party organisation working for peace in Northern Ireland, and was president of the Ireland Institute, a centre for historical and cultural studies. He served as the first chairman of the Artists’ Association of Ireland when it was founded in 1981, and he is a fellow of the World Academy of Art and Science. In 2006, the RHA showed a major Retrospective of Ballaghs work.

We inaugurate the latest in this intermittent series, Home, 2020. Designed in the form of a medieval altarpiece its closed panels show the outside of a series of terraced houses No. 3, 4 & 5. It bears comparison to the first in the series, No.3 painted in 1977, a swathe of forty-three years intervening between the images. They share the attention to detail where the artist builds up the façade of the building brick by brick, stroke by stroke. In 1977, the rear of a family Ford Cortina Estate pokes into the composition, in 2020 a fully rendered BMW sportscar is parked in front of the home, suggesting much has changed in the artist’s circumstances in those intervening years. No 3, depicts the artist’s two children and his wife Betty peeping out of the hall door. Ballagh, who appears in most if not all of these paintings holds a copy of an American self-help book in front of his face How to make Art Commercial – a necessary skill for a husband and father of two.