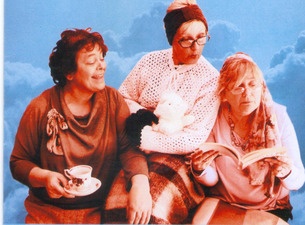 Tuesday 14th to Sunday 19th April 2020 – POSTPONED
Tuesday 1st to Sunday 6th June 2021 – NEW DATES
By Tommy Marren, writer of the highly-acclaimed comedies ‘It’s The Real McCoy’ and ‘Nobody’s Talking To Me’, the play centres around three characters – namely Mary O’Toole, Mary O’Neill and Mary O’Brien.
Three extra dates added on Thursday 30th, Friday 31st May and Saturday 1st June.
The three Mary’s have lived in this nursing home for over ten years and have become great friends. However, due to circumstances beyond their control, they are being moved to three separate nursing homes and the play is set around their last few hours together.
Mary O’Toole is a very religious character who has great devotion to Our Lady of Knock. Mary O’Neill is a Londoner who met and subsequently married a Kerry man and moved to Ireland. Mary O’Brien is a retired nurse who has travelled to almost every corner of the world!
With dozens of hilarious one-liners the play moves with pace throughout as the three Mary’s laugh, cry, argue, sing, dance and recount their life experiences. From statues to fishing rods, a would-be music composer, an enthusiastic and very posh ‘volunteer’ and a very frustrated nursing home owner this play has everything!