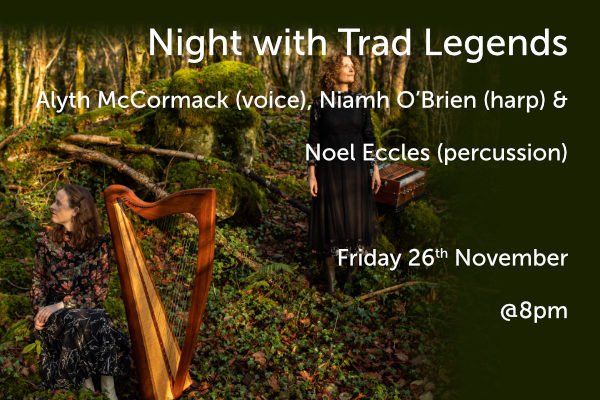 “She was nothing short of mesmerizing.”

Such praise – from an American tour stop with The Chieftains – is a common reaction to Alyth McCormack. Audiences on four continents have thrilled to what a reviewer in Glasgow called “a voice of great beauty and purity”, a voice that can make the playful and the heart-wrenching come alive with equal skill and grace.

“Alyth McCormack and Niamh O’ Brien have toured together for many years. Alyth and Noel (Eccles) met on stage, but their touring schedules and the musicians they regularly work with (The Chieftains, Moving Hearts, the RTE Concert and Symphony Orchestra’s), meant they didn’t always find time to perform together. Lockdown changed all this. Noel has joined forces with this delightful duo to support their intimate and beautiful blend of voice, harp, harmony and song; incorporating the old and new, the result is timeless.”

After tonight’s performance, there will be a question and answer session with the artists.

Though Ályth has earned acclaim for the matchless way she delivers the Scottish Gaelic songs on which she was raised, she is also known for her incredible diversity. Celebrated for her work with The Chieftains (she has been their featured singer for the last 14 years) Alyth has shared the stage with folk greats like Martin Carthy & Norma Waterson, jazz musicians like Edward Simon,  rock great Ry Cooder and country icon Trace Adkins. She also dueted with the legendary Kris Kristofferson and others ranging from Brazilian ensembles to Bulgarian voice choirs. She has toured extensively with her own band too.

“No matter what the format”, said New York’s TimeOut, “her voice is spine-tingling.”

Decades into her career, McCormack continues to seek new means of expression.

“Being a singer, I have always wanted to write my own songs,” she says, “but I didn’t have the confidence. I had lots of song ideas but didn’t know how to begin. I remember reading that Gaelic poet and songwriter Màiri Mhòr nan Òran didn’t start writing songs till she was in her 50’s and I used to say, ‘There’s hope for me yet!’ A few years ago in Nashville, I met writer Rob Simbeck, and he believed in me. Here I am at 51, ready to tell my own story.”

Those songs will find a home with one of the beloved voices of her generation, and she will find great pleasure in singing them. The bottom line is reflected in what she calls “my favourite line from any review”…

“Alyth McCormack loves singing, and lets you know that without telling you. You can hear it in her voice.”  The List.

Niamh O’ Brien is a harp player, composer and singer from Co. Limerick. She has performed in Ireland, Europe and America as a solo artist and with traditional groups such as An Tara, Mick Molony, Hoodman Blind and The Chieftains.

Since 2017 she has been active in audio and radio production, working as an editor and producer with the award-winning Grey Heron Media and The Irish in New York Oral History Project. She is currently a PhD candidate at the Irish World Academy of music and Dance, UL. Her research explores how she can fuse traditional, folk, and electronic music with radio and audio arts.

Belfast born Noel Eccles was appointed principal percussionist to the RTE National Symphony Orchestra of Ireland at the age of 18, the orchestras youngest ever section leader a position he held for 17 years until 1995.

His innovative approach to music brought him extensive work with Irish and International composers and producers. The country’s ‘first call’ studio percussionist Noels’ concert and recording credits feature U2, The Corrs, Rita Connolly, Mike Oldfield, The Chieftains, Van Morrison, Anuna, David Foster, Elmer Bernstein, Elvis Costello, Secret Garden, Shaun Davey, Dave Stewart, Brian Eno, Imelda May and Glen Hansard. He has contributed to many Grammy-nominated, and Grammy awarded albums. His studio work brought him to the attention of Moving Hearts, the ground-breaking Celtic Rock band who defined the genre with their album ‘The Storm’. His connection with the band led to collaborations with traditional musicians in Ireland and abroad, which continues projects from Romania to Roscommon and Norway to Notre Dame. He was an original member and Musical Director of the Riverdance Orchestra and premiered the show in all of the major cities of the USA, Europe, Asia, and Australia.

He also leads the percussion department at The Conservatoire of Music and Drama at Technical University Dublin, Grangegorman.