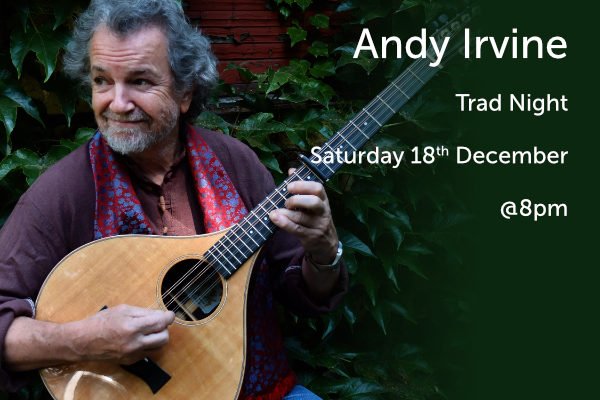 Andy Irvine has enjoyed a long and successful career as a traditional Irish musician. He has travelled the world as a solo artist and as a member of legendary Irish groups such as Planxty and Patrick Street and more recently Mozaik. Throughout his extensive career he has maintained and developed the qualities in his music, which endear him to his audience and fellow musicians alike.  After his introduction to the world of touring with Sweeney’s Men in 1965, he continued to travel the world, leaving the band in 1968 to pursue his wanderlust. He travelled through Bulgaria, Romania and Yugoslavia, studying the music traditions and styles of these nations. It was these journeys, which led him to adopt the bouzouki in his performance. This new instrument allowed him to develop his own style while learning that of the Balkan countries he visited.

On his return to Ireland, Andy formed Planxty with fellow musicians Christy Moore, Donal Lunny and Liam O’ Flynn. Planxty went on to achieve huge success and legendary status, reigniting traditional music as a popular genre. While Planxty took a break in 1967, Andy took the time to record another piece of work with Paul Brady. The two recorded a classic album together, simply entitled “Andy Irvine & Paul Brady”. Planxty regrouped from 1979 – 1983. When the group permanently disbanded, Andy began his solo career. He recorded his first album “Rainy Sundays…. windy dreams” shortly after. His second album was “Parallel Lines” a duo album with the great Scots troubadour, Dick Gaughan.

Taking a break from working solo, Andy formed a band with Donal Lunny and some European friends called Mozaik. They completed one European summer tour before Andy returned to his solo and collaborative work.  These collaborations led to the formation of Irelands first traditional “super group” Patrick Street. The group consisted of Kevin Burke (Bothy Band), Jackie Daly (De Dannan) and guitar maestro Arty McGlynn. The group toured from 1987–1990, releasing three albums in the process. They would regroup in 1993 to release a further five albums, although in between Andy recorded two solo albums. One of these albums consisted of entirely Balkan music, which Andy had learned on his earlier travels.  In 2002, Andy finally formed his “dream band”, Mozaik, with Donal Lunny,  HYPERLINK “http://andyirvine.com/promo/rens-bio.html” Dutch guitarist Rens van der Zalm, Hungarian bagpiper Nikola Parov and American fiddler Bruce Molsky. The group have completed tours of Australia, Europe and America and have released two highly acclaimed albums

Andy continues to tour the world with Mozaik as well as Patrick Street. He has also completed a brief series of reunion concerts with Planxty and Paul Brady in the last few years. His constant touring is testament to the fact that he is still as passionate about his music as when he began. As a musician and a living icon, Andy Irvine will remain in the Irish music scene for a long time to come.