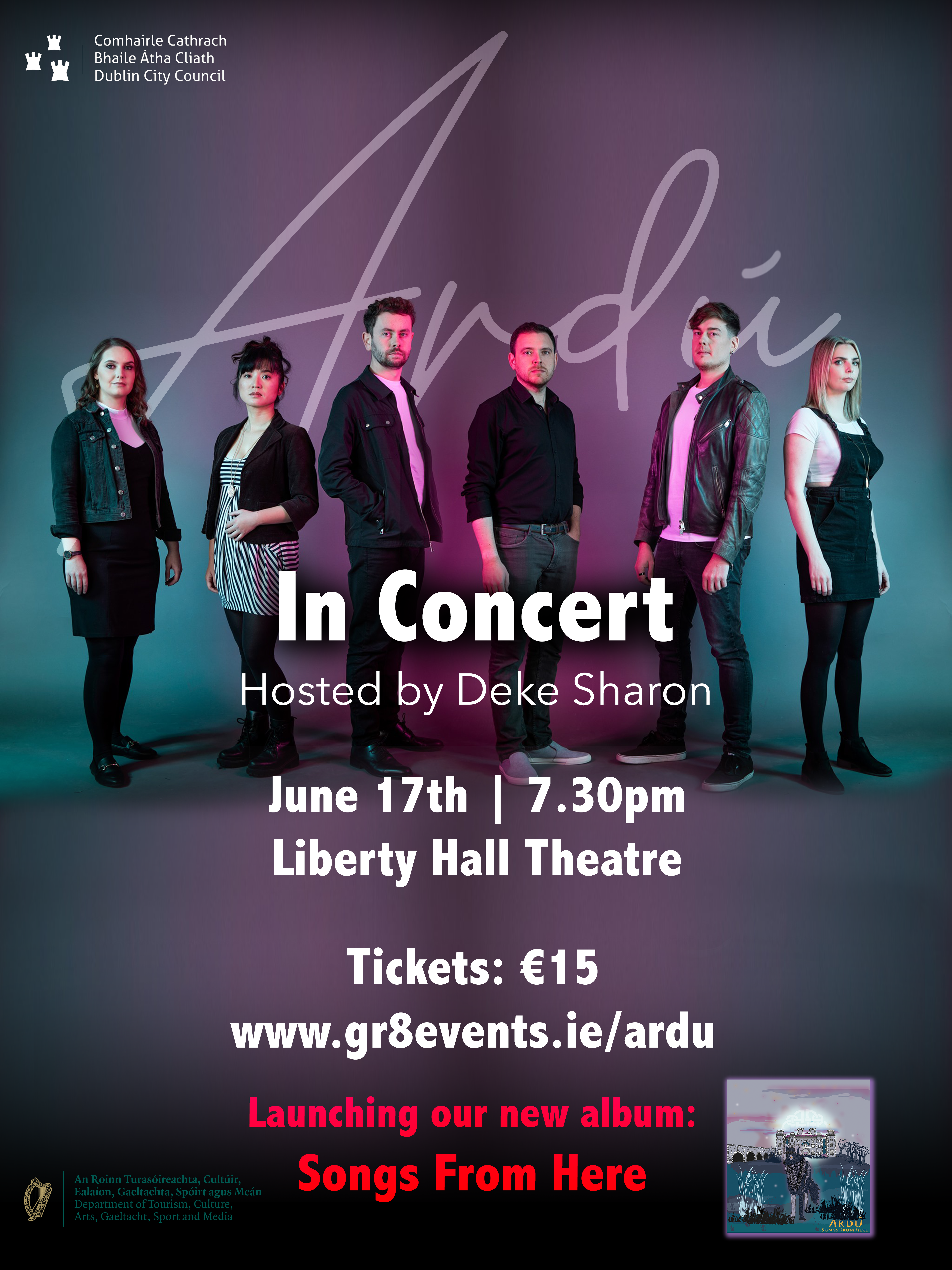 Ardú will officially launch their new album ‘Songs From Here’ on Friday 17 June 2022 at Liberty Hall in Dublin supported by the Department of Tourism, Culture, Arts, Sports and Media, and Dublin City Council. This event will be hosted by ‘father of a cappella’ Deke Sharon who is best known for his work on the Pitch Perfect movie franchise.

Ardú’s new album ‘Songs From Here’ is a collection of songs with origins in Ireland including traditional tunes ‘Carrickfergus’ and ‘The Coolin’ as well as covers from some of the best Irish musicians: ‘I Wouldn’t Be’ (Kodaline), ‘Days Like This’ (Van Morrison) and ‘Galileo’ (Declan O’Rourke). The album also features lesser known tracks written by established Irish songwriters Carl Corcoran, Eoin O’Callaghan and Suzanne Savage. This collection was arranged for Ardú throughout 2021 by their artistic director Ciarán Kelly and recorded in late 2021 and early 2022.
Tickets €15
Available from www.gr8events.ie/ardu

Deke Sharon
Heralded as “The Father of Contemporary A Cappella,” he is responsible for the current sound of modern a cappella, having pioneered the modern vocal-instrumental sound in college, subsequently spreading it around the world. He produced “The Sing-Off” on NBC and worldwide (Netherlands, China, South Africa). In addition, Deke served as arranger, on-site music director and vocal producer for Universal’s “Pitch Perfect” 1, 2 & 3 starring Anna Kendrick & Rebel Wilson.

Ardú
Ardú is Ireland’s premier a cappella vocal band, an award-winning ensemble and pioneer of contemporary vocal music in Ireland. This Dublin-based group regularly performs at high profile festivals in Ireland such as the City of Derry International Choir Festival (2020), MusicTown Festival (2020), K Fest (2019) and the Cork International Choral Festival (2018), where they performed alongside Swedish trio Solala. The group has featured on TV and radio including the Ray D’Arcy Show, the BBC Proms and Sing: Ultimate A Cappella on Sky One. They supported American a cappella group Straight No Chaser at the National Concert Hall, Dublin in September 2019. Ardú also has a busy touring schedule and has so far represented Ireland in international festivals in London, Edinburgh, Finland, Croatia, Austria and Italy.
Ardú have also won many awards, including first prize in the 2018 Choirs for Christmas competition on RTÉ Lyric FM, and were runners up in the 2019 Contemporary A Cappella Recording Awards in the ‘Best Classical/Folk song’ category for their recording of Homeward Bound, arranged by Oliver Lambert. They were also awarded the audience award at the 2019 Vokal.Total festival in Austria.

Snow White and the Seven Dwarfs the Summer Panto