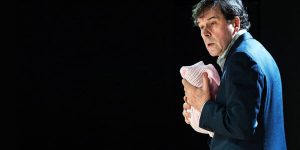 Commissioned by The Space, this film of Cyprus Avenue, by David Ireland, mixes live capture of performance from the iconic stage production with location shooting in Belfast. It was first broadcast on Sunday 15 September 2019 on BBC Four.

Starring Stephen Rea and directed by Vicky Featherstone, the award-winning Cyprus Avenue was originally coproduced by the Royal Court Theatre, London and Abbey Theatre, Dublin before touring to The MAC in Belfast and the Public Theater in New York.

The film adaptation was commissioned by The Space and produced for BBC Four by the Royal Court Theatre. It was Executive Produced by Lucy Davies, Jane Featherstone, Barbara Broccoli and Michael G Wilson.