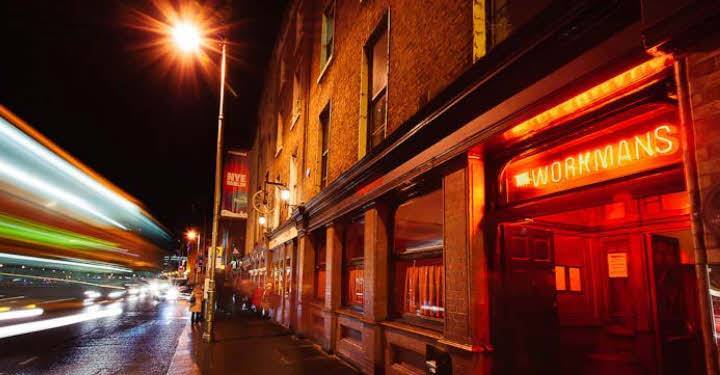 THE NEWSPAPER TAXI MEN
THE NEWSPAPER TAXI MEN performed legendary sets at the Dublin Beatles Festival in 2013, 2014 and 2015… and it’s a genuine honour to finally get them back together again and blackmail them into playing for us at this year’s ‘Big Gig’ in the Workman’s Club. These guys play a brilliant selection of songs from the different periods of The Beatles (and Jon Ward’s voice will make you glad to be alive). Anyone who has seen this band play live before can confirm that they are pure quality. You would be crazy to miss this performance. And God knows when we’ll be able to blackmail them again!
THE ROCKETS (Dublin)
This brilliant Dublin band play the rock ‘n’ roll songs which inspired The Beatles in Hamburg between 1960 and 1962. That is to say, they play the music of Elvis, Eddie Cochran, Buddy Holly, Chuck Berry, Gene Vincent, Link Wray and Little Richard… and they play it with raw energy and attitude. These guys have played at festivals all over Ireland and the UK – and they have even headlined at the Cavern during Liverpool’s International Beatle Week. You can certainly bet your house on a stomping set of vintage rock ‘n’ roll from this band when they play the Workman’s on Saturday, November 2nd.
It’s going to be a lot of fun. Get ready to dance.
Running order for the show:
8.00pm – Doors open
8.30pm – The Rockets (Dublin) play vintage rock ‘n’ roll music
9.20pm – Interval
9.35pm – The Newspaper Taxi Men play songs from The Beatles
The show will end at 11.00pm.
This gig sells out every year – so please buy your tickets early to avoid disappointment.