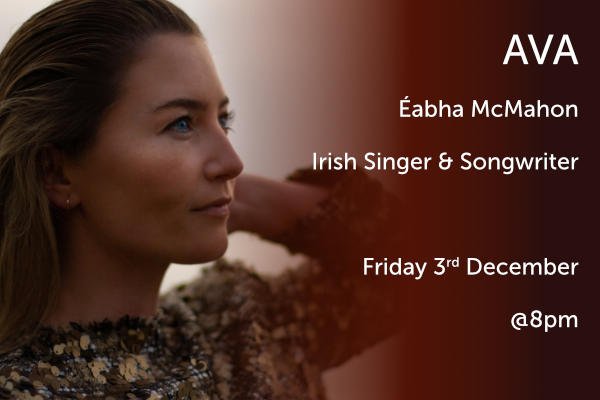 “I love that music is a universal language, whereby one person’s story can be interpreted by so many, in different ways. Writing for me, has always been a way to acknowledge the human spirit, and hopefully help others to know they are not alone with how they are feeling” – AVA

AVA is the name under which Irish singer/songwriter Éabha McMahon presents her solo work (the phonetical spelling of Éabha). Éabha has already garnered world attention for her unique voice, firstly as part of Anuna, the internationally renowned Irish Choral group and then as principal vocalist with the globally successful Irish music collective Celtic Woman with whom she recorded five albums, filmed three television specials and performed sell out concerts in 20 countries across 6 continents. She has been number one on both Billboard’s World Music Chart and Classical Chart and has received her first Grammy nomination.

Brought up steeped in the Irish language and trained in the traditional way of Sean Nos singing, Éabha continues the centuries old Irish tradition of storytelling through song, bringing her own modern contemporary style to the art and seamlessly blending English lyrics with her native Irish language that adds a poetic rhythm to her songwriting. It was always somewhat inevitable that Éabha was heading for a career in music. Her first professional singing job was at the age of nine when she was chosen by Veritas to record an album for the children’s book Beo go Deo. Éabha was known for singing in the Sean Nos style, a form she first encountered at the age of five. In this traditional style she was not just inspired, but also taught, by such luminaries in the art as Máire Ní Chollm, Seamus and Ide MacMathúna and Moya Brennan. From an early age, Éabha was a regular competitor at Ireland’s Fleadh and was crowned the Leinster champion four times and was runner up in the All Ireland Fleadh.

At age fifteen, she also won the under-18, Oireachtais na héireann final. At age sixteen she was invited to join Anúna, the acclaimed Irish choral group. who first came to world attention as part of the original Riverdance show and she became a prominent soloist during her time with them Even with this busy musical schedule she took the time to complete a Human Rights Degree at NUI Galway, and this would lead to a lifelong passion for that subject that equals her passion for music. Éabha has spent time in Vietnam and Mongolia working with the Christina Noble Children’s Foundation, an organisation that she is still immensely proud to work with to this day.

Following a year or so travelling across far flung corners of the world undertaking humanitarian work, she had just begun working on a solo album when in early 2015 she got the call to join Celtic Woman. After five years with them, she departed from the group at the end of 2019 to finally begin work on her long awaited solo record. Her debut album ‘Wildflower’ comprises original songs that encapsulate the rhythm of the earth; the unwavering momentum of love and loss and the global concerns we have for ourselves, for each other and for the world we call home. Contemporary with traditional influences, the album has its roots in World Music, haunting at times, lavish at others, irresistible melodies with ethereal overtones. www.avaworldmusic.com