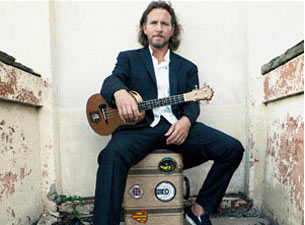 Most famous for his role as lead singer for Pearl Jam, a band that formed a fundamental part of the grunge music scene of Seattle in early nineties, Eddie Vedder became a reluctant pop icon much like his then contemporary Kurt Cobain. Alongside Nirvana, Alice in Chains and Soundgarden, Pearl Jam became the “voice of the passion and fears of a generation” according to Time magazine, on whose front cover Vedder was featured in October 1993. However, despite huge success for all the bands listed, Pearl Jam’s debut album, Ten, outsold them all, reaching platinum record sales 13 times over. Tackling difficult subjects such a depression and suicide, Vedder’s lyrics touched the otherwise disenfranchised youth of Generation X, connecting people through music in a way that had not felt possible by other genres of the time.
Born in Illinois but raised mostly in California, Vedder’s first band, Bad Radio, although successful in his hometown of San Diego, never reached a larger audience. It wasn’t until ex drummer from the Red Hot Chili Peppers, Jack Irons, connected him to the other members of the band in 1990, that Pearl Jam became a possibility. Iron’s sent Eddie a demo tape of the band’s music, to which he quickly penned some lyrics and gave his now infamous gravelly vocals. Among others, created on that demo was Alive, arguably the band’s most beloved single. The existing band then known as Mother Love Bone, quickly swept their new front man up to Seattle instantly.