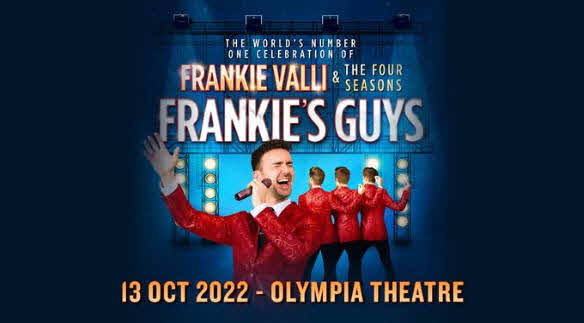 Following their spectacular sold-out Dublin show, Frankie’s Guys are to return to The Olympia Theatre on 13 October 2022 due to public demand!

Paying a charismatic tribute to Frankie Valli, his life, his music and his legacy; Frankie’s Guys are back with a fresh take on their award-winning show. Featuring unrivalled vocals, slick moves and side-splitting comedy (they think they’re really funny).

A night at The Olympia Theatre you don’t want to miss!

Taking you back to the era of live music – effortlessly recreated by their trusty (and cheeky) band, get ready to sing-along to over 20 timeless classics, such as Big Girls Don’t Cry, Sherry, Walk Like A Man, Oh What A Night! and many more. You’ll be dancing in the aisles before you know it!