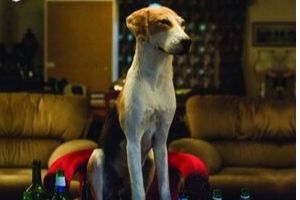 Three reclusive former child stars are forced to sell their lavish South Dublin home when they finally run out of money after years of living to excess.
Having gathered to mourn their manager’s death, things begin to get weird.
Long held secrets come unravelled, a popular dance craze takes on new importance, lifelong friendships are tested and a dead dog oversees it all.
Are these overgrown children ready to leave behind their fantasy world for a life more ordinary?
“Hollow and Dead-Eyed Beasts” is a sort-of-kind-of-comedy; a bit about friendship, not quite regarding fame, almost concerning childhood with one hand vaguely in the area of death whilst also enjoying a passing reference to a popular 90s dance craze with the faintest nod to ritual and only slightly on the subject of the housing market (though having nowhere near enough of a perspective to qualify as satire).
And this is all to say nothing of the really rather dead dog.
Brought to you by Some People Theatre Company, the team behind the sell-out Dublin Fringe Festival show “White” (Pick of the Fringe 2018. – The Sunday Times, “Simultaneously cutting and laugh out loud funny” – MEG.ie, “At times exceptional, vividly satirical” – The Reviews Hub”)
Running Time : 50 mins
Suitable for all ages 14+
Sexual reference | Contains taxidermy
WRITTEN & DIRECTED BY: Pea Dinneen
CAST: Kevin Cleary, Niamh McGowan, James O’Neill
PRODUCED BY: Caoimhe McGowan
LIGHTING DESIGNER : Riain Condon
STAGE MANAGER : Kate Canavan
GRAPHIC DESIGNER : Kate Brady
Developed at FRINGE LAB with the support of Dublin Fringe Festival