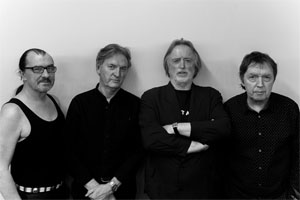 “The Snakes Farewell to The Emerald Isle” is an iconic Horslips track and one that Johnny Fean, Jim Lockhart, Barry Devlin and Ray Fean – the touring Horslips line up – certainly plan to play when they take to the stage in The Olympia Theatre Dublin on 19th Sept 2021

‘The last time we played the Olympia’, recalls flautist and keyboard player Jim Lockhart ‘was another big public holiday, the Christmas shows back in…would you believe over eight years ago, 2012? Gosh, time flies when you’re having fun.”

Since their triumphant return to playing in the O2 – back in 2009 – the band has played in America, the UK and Europe: ‘and we hope to do a few more English and European appearances over the next while as well as our Irish gigs’, says bass player Barry Devlin.

The band have released 10 studio albums and 2 live albums as well as many singles in the years between 1971 and 1980 – all are still available as CDs and downloads. They recently rereleased vinyl copies of two of their best known albums ‘The Tain” and ‘The Book Of Invasions”.