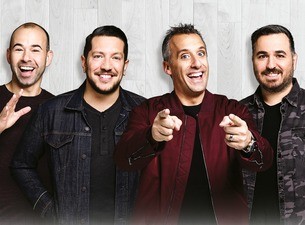 Joseph “Joe” Gatto, James “Murr” Murray, Brian “Q” Quinn, and Salvatore “Sal” Vulcano are collectively known as the The Tenderloins, the quartet rose to fame on the reality TV programme, Impractical Jokers.
Premiering on TruTV in December 2011, the hidden camera series sees the friends coerce one another into doing public pranks. It quickly set itself apart from its contemporaries by filling the show with clever humour rather than slapstick or crude comedy.
Recent pranks have seen members of The Tenderloins fall instantly head-over-heels for a stranger, make some unusual suggestions in a city planning meeting, and attempt to gift-wrap shoppers’ groceries in a supermarket.
In early 2018, TruTV announced the renewal of Impractical Jokers, taking it into its eighth season. The 26 brand new episodes are set to be aired from February 2019, with a feature-length film also in the works.
The Tenderloins have announced that they’ll be returning to the UK in October 2019 with a brand new show. Their live shows see the four-piece bring their improv and comedy experiences to stages across the UK, blended with footage and associated stories from the hit TV show.