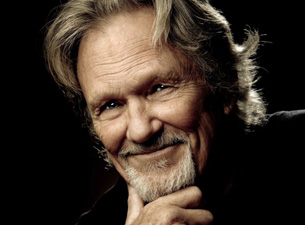 Kris Kristofferson has been making things happen his entire life. Born in Texas and raised in a military family, he was a Golden Gloves boxer who studied creative writing at Pomona College in California.
The Phi Beta Kappa graduate earned a Rhodes scholarship to study literature at Oxford, where he boxed, played rugby and continued to write songs. After graduating from Oxford, Kristofferson served in the army as an Airborne Ranger helicopter pilot and achieved the rank of Captain.
In 1965, Kristofferson turned down an assignment to teach at West Point and, inspired by songwriters like Willie Nelson and Johnny Cash, moved to Nashville to pursue his music.
In addition to many other awards, Kristofferson is a member of the Country Music Hall of Fame, winner of the prestigious Johnny Mercer Award from the Songwriter Hall of Fame, and was honored with the American Veteran’s Association’s “Veteran of the Year Award” in 2002. For Kristofferson’s 70th birthday in 2006, his friends and admirers gifted him with a tribute CD, The Pilgrim: A Celebration of Kris Kristofferson. Stars including Willie Nelson, Russell Crowe, Emmylou Harris, Gretchen Wilson, Rosanne Cash, and Brian McKnight recorded 17 of Kristofferson’s compositions for the tribute.
In 2007, Kristofferson was honored with the Johnny Cash Visionary Award from Country Music Television and in 2009 BMI lauded Kristofferson with the Icon Award. He received the Frances Preston Music Industry Award from the T.J. Martell Foundation in March, 2012. In 2014, Kristofferson was honored with a GRAMMY Lifetime Achievement Award and the PEN Song Lyrics of Literary Excellence Award.