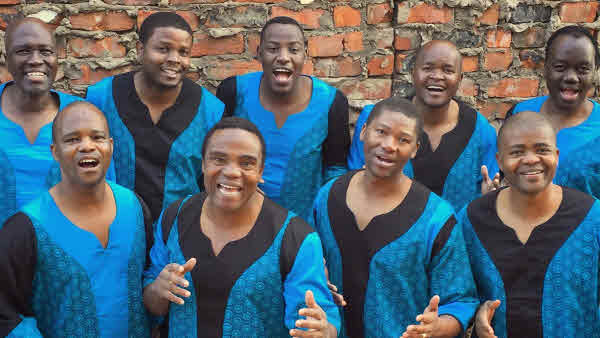 Ladysmith Black Mambazo are one of the world’s greatest and most distinctive vocal groups. For sixty years the legendary a cappella male choir have invoked the soul of South Africa with their intricate rhythms and harmonies and powerful, uplifting songs. They shot to global stardom after featuring on Paul Simon’s ’Graceland’, and have been touring the world ever since, and were re-united with Paul Simon a few years ago on the Graceland world tour.For sixty years Ladysmith Black Mambazo have sung powerful, uplifting songs that emote the struggles and passion of South Africa. Nelson Mandela called Ladysmith “South Africa’s cultural ambassadors”. The group’s joyously energetic performance combines loud powerful choruses with softer, almost whispering chants where voices blend harmoniously, and tightly choreographed dance moves.These performances celebrate the life and music of Joseph Shabalala, the founder of Ladysmith Black Mambazo, and are dedicated to his memory. When Joseph formed the group that became Ladysmith Black Mambazo 60 years ago, he had a dream of a South Africa in harmony, and all his life he created great vocal music that came to speak to the whole world. Joseph retired in 2014 and handed leadership of Ladysmith Black Mambazo to his four sons Thulani, Msizi, Sibongiseni and Thamsanqa, who carry Joseph’s song of a united South Africa into the future