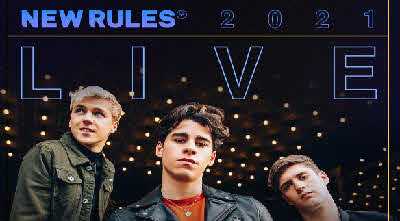 New Rules are songwriters and musicians Nathan (21, London), Ryan (19, Dublin) and Alec (18, London). Having only launched the band last April 2019, New Rules have already gained a fanatical fan base across the globe. They have sold out both of their headline UK & Ireland tours and supported Julia Michaels and Little Mix on their UK tour dates. Not even a year old the band have big support from Radio Disney US, with Fix Somebody being added to their 2020 playlist amongst all the big pop names.

At the end of last year, they were invited to perform on the Alfa Radio event following their success in the Mexican Radio charts and packed out their first headline show, alongside a packed promo run where they performed for MTV, Radio Disney Latin America and much more. They have just returned from the Philippines performing on the countries 2 biggest TV shows, ASAP and Showtime alongside the Filipino superstar Inigo Pascual. Check out New Rules in Mexic