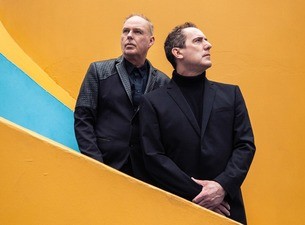 Orchestral Manoeuvres In The Dark, one of the UK’s most iconic bands, are back with their first new album in 14 years, the appropriately entitled ‘History Of Modern’. And what a return. Andy McCluskey has called it ‘our best album since Architecture and Morality’ – and few would disagree. The album was produced by OMD and mixed by one of the UK’s most in demand producers Mike Crossey (Artic Monkeys/Blood Red Shoes/Razorlight).
‘History of Modern’ is a powerful, pulsating, vibrant and contemporary album with a strong pop sensibility. Tracks such as ‘Pulse’, ‘Save Me’, ‘Sister Marie Says’ and ‘The Future’ are huge future dancefloor fillers while others like the downtempo ‘Bondage Of Fate’, ‘If You Want It’ and ‘Sometimes’ are quite simply beautiful, classic OMD songs.