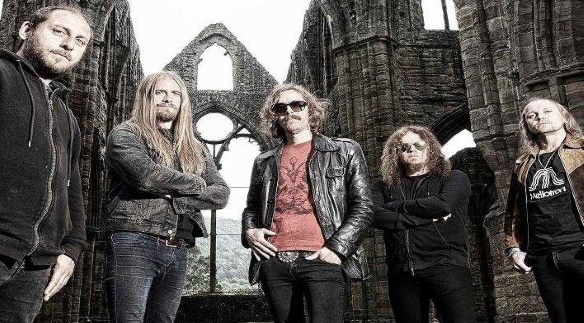 Brought together in Stockholm by guitarists Peter Lindgren and Mikael Åkerfeldt in 1990, Opeth added progressive influences and acoustic instrumentation to their brand of Swedish death metal.
As the group progressed, it was very common for an Opeth live set to fly in several different musical directions — and an average song lasted no less than ten minutes. Impressed by their originality, Candlelight Records released their debut full-length in 1995, which was titled Orchid, and featured a rhythm section of bassist Johan de Farfalla and drummer Anders Nordin. Edge of Sanity mastermind Dan Swano produced the band’s ambitious second album, Morningrise, in 1996, after which they embarked on a brief tour with Morbid Angel.
Century Media took notice and not only licensed Opeth’s first two albums for the United States, but also planned on releasing their next album on both sides of the Atlantic. With the recruitment of bassist Martin Mendez and drummer Martin Lopez (ex-Amon Amarth) to replace the departed de Farfalla and Nordin, Opeth’s third album, My Arms, Your Hearse, was released in 1998 to glowing reviews, establishing the band as a leading force in progressive metal with death roots.