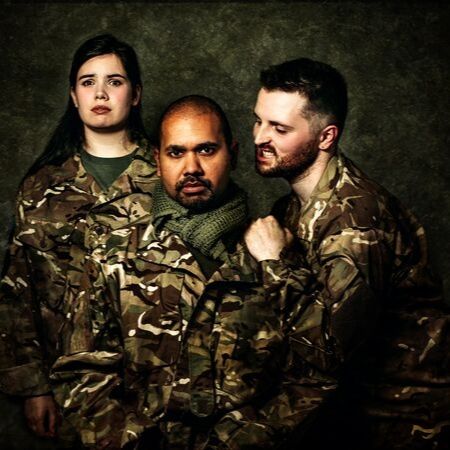 The Turks are attacking Cyprus and General Othello, ‘The Moor’, is sent with an army by the Venetian Duke to stop their advance.  In the claustrophobic atmosphere of a Cypriot military stockade, the psychopathic Iago convinces Othello that his wife, Desdemona, is having an affair with The Moor’s right-hand man, Captain Cassio.
The result is an explosion of mistaken motives, violence and murder.  Shakespeare’s original script abridged to 130 minutes including interval.

‘Othello is a triumph for the Bright Umbrella Drama Co… Sam Mahadeo’s Othello uses light and shade across his performance… Glenn McGivern plays scheming Iago as a brutal bully hidden in plain sight, never showing signs of weakness… Bryony Randall gave Desdemona a sense of pluck, looking up adoringly at her new husband Othello and delivering tender moments – and some sweet singing – but also capable of turning up the emotion when its required… As a story of racism, love, deception and jealousy, misplaced trust and loyalty, and hyped up with planted evidence, suffocation and revenge killing … the universal themes of Othello certainly resonate in Belfast and beyond”.
– ‘Alan in Belfast’ (Alan Meban)

Age Suitability: All ages
(Some scenes of domestic violence)

About the company
BUDCo’s Mission Statement is, ‘Entertain, Educate, Challenge’.  The company produces classical drama, including Shakespeare, in contemporary settings for theatres, schools and colleges and plays, including new writing, dealing with contemporary issues including mental health promotion, racism and sectarianism.  BUDCo operate from its own theatre space, ‘The Little Theatre’ (’60 seats of pure joy’) in East Belfast.  The company has a commitment to produce plays by established and upcoming East Belfast playwrights.