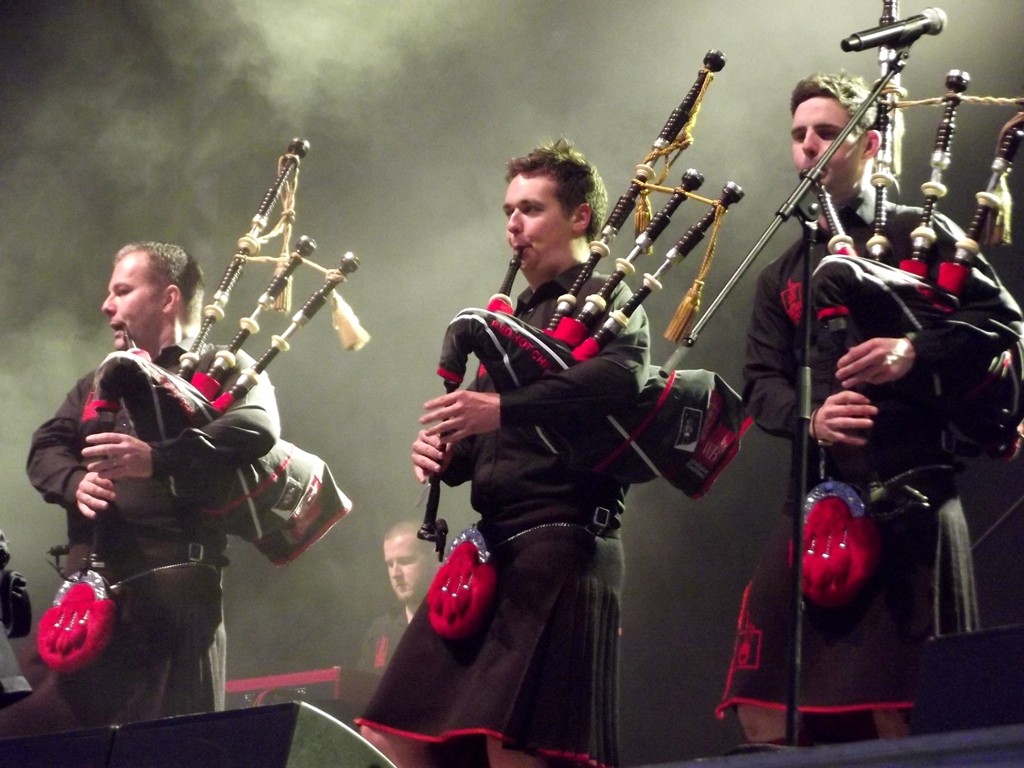 From a cameo appearance at T In The Park in 2004 with The Darkness, to opening the Main Stage in their own right in 2014, the past 10 years has seen The Red Hot Chilli Pipers become the most famous bagpipe band on the planet – ever!
Bagpipes with attitude, drums with a Scottish accent and a show so hot it carries its own health warning. The band’s achievements have reached incredible heights with their ground-breaking fusion of traditional Scottish music and Rock/Pop Anthems which they proudly call Bagrock.
… Gold disc for over 100,000 UK sales of their first album: Bagrock To The Masses
… Triple platinum album status for their third album and DVD: Blast Live
… Twice awarded Best Live Act In Scotland
… Almost 2 Million views on YouTube of their viral cover of the Avicci track Wake Me Up
as performed for BBC Radio 1
… Sell-out tours, gigs and festivals in the UK, USA, China, Australia, New Zealand, Germany, Denmark, France, Spain, Luxembourg, Belgium, The Netherlands, Portugal, Switzerland, Ukraine, Barbados, Dubai, Bahrain, Saudi Arabia, Qatar and India
… Winners of the BBC Prime Time Talent Show: When Will I Be Famouns
… TV appearances worldwide
… A Big Hearted Scotland nomination for their incredible work for charity worldwide
… Regular performances for A-List Showbiz, Sporting Stars, and Royalty: Her Majesty The Queen, The Scottish Rugby Team, Sir Alex Ferguson, Sir Paul McCartney, Gary Player, Ewan McGregor, Samuel L Jackson
… Appearances at major national events – BBC Proms In The Park, T In The Park, The Commonwealth Games, The Bahrain Grand Prix, The Rugby World Cup, US TV Documentary during NBC coverage of The Olympic Games
… 177,000 Facebook followers.
The Chillis have never been more in demand for their infectious style of feel-good music, which appeals right across the age range to people all over the world. They have a pool of the very best musicians from Scotland and across the globe – many holding World Championship Titles, and all serious players with impressive credentials and qualifications.
There has never been anything quite like The Red Hot Chilli Pipers. Wherever you are, you are sure to have felt the Chilli heat. It’s time now to come closer to the fire!