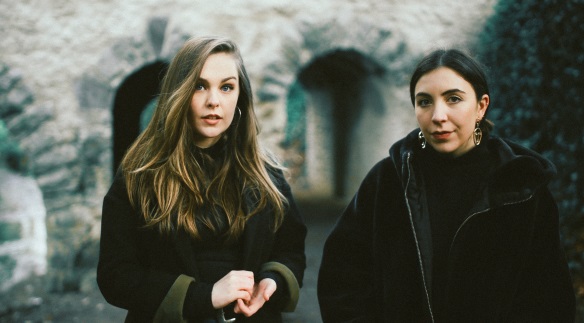 Self-produced and self-released, every inch of Saint Sister’s sophomore record, Where I Should End, belongs to them. Written on and off the tour cycle of their 2018 debut LP Shape of Silence, the album seeks to find meaning in a world that doesn’t stand still. And although the stories behind the songs stem from the unravelling and rebuilding of relationships while on the road, Where I Should End finds harpist/arranger Gemma Doherty and vocalist/songwriter Morgana MacIntyre in a place of great certainty, and performing at their peak.

The duo, feeling boxed-in by the descriptor “atmosfolk” (a term coined for Saint Sister around their 2015 Madrid EP), challenged themselves to create a distinctive shift in their sound with their new album. On Where I Should End, Doherty and MacIntyre built upon their already evocative, entwining vocals and rich, atmospheric melodies to craft varied and resonant soundscapes that radiate with a breathtaking new warmth.