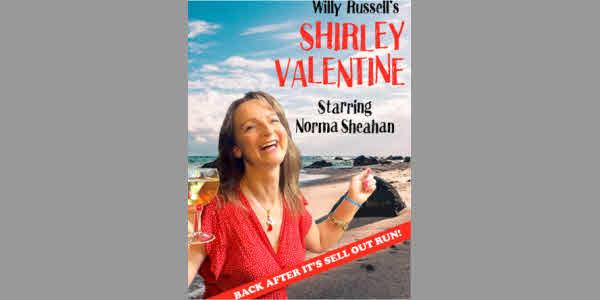 Ahead of the return to the Gaiety Theatre, Norma Sheahan says: “A good dose of Shirley Valentine is what we all need right now. Enough talking to the walls! And if you can’t get on hols yet, Shirley will give you a Greek Boost!  Or help you rediscover your clitoris!

Legend Willy Russell, the writer, zoomed us to create this Irish Shirley version ! And he’s hoping to get to the glorious Gaiety for this run!”

Treat yourself to an evening of laugher, fun and triumph, as Norma Sheahan, one of Ireland’s leading dramatic actors, breathes new life into Willy Russell’s effervescent and iconic character SHIRLEY VALENTINE.

Meet Shirley, a 45-year-old housewife. Trapped in a dreary marriage and humdrum life, Shirley wonders when she lost her hopeful, youthful self, isolated and lonely, she has now resorted to full-blown (although somewhat one-sided) conversations with her kitchen wall.

A woman alone, with no support from her demanding husband, her snooty neighbour, or self-absorbed “flown the nest children” Shirley seeks adventures away from her role as “St. Joan of the fitted units”.  So, when a divorced friend asks her to go on a two-week vacation to Greece, Shirley, bravely gathers what remains of her dignity, digs deep into her flagging confidence, and begins a humorous and uplifting voyage of rediscovery.

Shirley with ever-opening eyes, begins to see the world – and herself – in a different light… but will she ever return to her dismal kitchen?