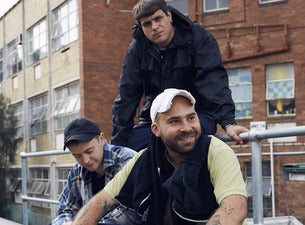 Aussie three piece The DMA’S are made up of Tommy O’Dell, Matt Mason and Johnny Took. The band formed in Sydney in 2012 and made an immediate impression with their 2014 debut EP. Their full-length debut Hills End reached number 8 in the Australian album charts, before their 2018 follow-up For Now went one better. The album earned three ARIA Music Award nominations for Best Group, Best Rock Album and Best Independent Release and reached number 13 in the UK album charts.
In 2018, they became one of the few Antipodean bands to play an MTV Unplugged session, following in the footsteps of the likes of Midnight Oil, Crowded House and Gang Of Youths. The ensuing summer saw the band continue to expand their following in the UK with main stage sets at Isle Of Wight, TRNSMT and Citadel alongside huge outdoor shows with Courteeners and Noel Gallagher’s High Flying Birds.
In January 2020, the band revealed details of their third studio album The Glow, recorded and mixed in LA and London with multiple Grammy winner Stuart Price (Madonna, The Killers). The second single from the album, Life Is A Game Of Changing, was premiered on Radio 1.
The DMA’s also announced details of 2020 UK shows, including a benefit gig at ULU in aid of The Australian Bushfire Relief, a string of festival appearances and an October show at London’s Alexandra Palace.