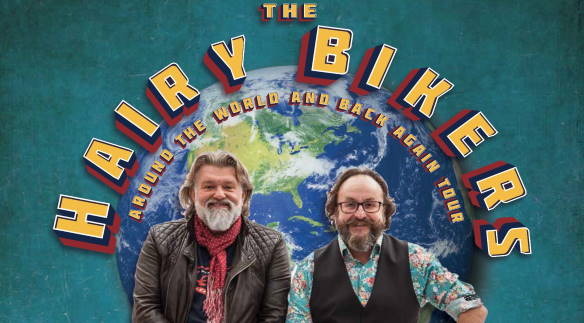 The Hairy Bikers have been entertaining Britain with their TV shows for over a decade and have sold in excess of 5.7 million copies of their books. They understand the importance of great food and home cooking to every household. Their unique blend of foodie expertise, humour and motorbike enthusiasm has earned them a huge and loyal following. They are regular faces on the BBC, with many Prime-Time TV successes tucked under their leathers. Their recent series ROUTE 66 is available on iPlayer now with their new book One Pot Wonders released on 31st October 2019.
With their unique blend of tasty recipes, cheeky humour and irresistible enthusiasm, The Hairy Bikers have become Britain’s favourite food heroes. Born and bred in Barrow-in-Furness, Dave Myers’ versatile skills have taken him to some unusual places. He worked in a steelworks as a student, to finance his studies in Fine Arts, and later joined the BBC as a make-up artist, specialising in prosthetics. Si King hails from North East England and is a big, blond bearded biker with an infectious laugh. He worked for many years as an Assistant Director and Locations Manager for film and television, including the Harry Potter films.