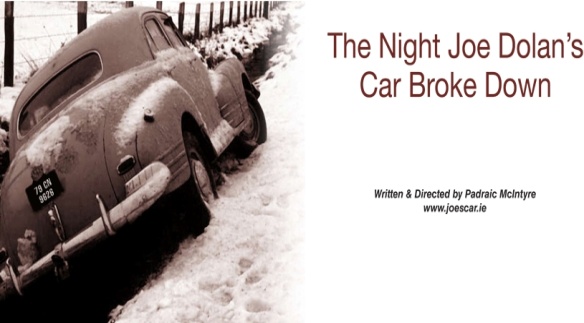 Imagine being stranded with the legendary Joe Dolan in a rural pub in Cavan on the night his car breaks down.  That’s just the sort of fantasy scenario that’s imagined in “The Night Joe Dolan’s Car Broke Down” a play written and directed by Padraic McIntyre. The play is set on a stormy St. Stephen’s night as people gather to celebrate the 60th birthday party of the The Horse Munley.  As the storm worsens and people head home, a knock to the door brings the night’s entertainment to a new level.  As the play unfolds so too does personal secrets, the music and the craic.

This hilarious show has been a sellout success in theatres all over the country including The Olympia, The Ramor Theatre Virginia, Roscommon, Longford, Mullingar, Monaghan and Galway. Mixing comedy, drama and music it is a treat for all theatre and Joe Dolan fans alike!