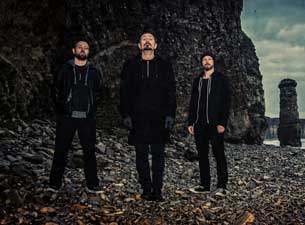 Formed in Belfast in 1989, Therapy? have been described as the bridge between Metallica and Nirvana.
One of the many bands whose careers were jump started by legendary Radio One DJ John Peel, when he played their debut single Meat Abstract on his show. Debut album for A&R records, Nurse, was released in 1993, but it was 1994’s Troublegum and single Screamager that really made people take notice. This was followed in 1995 with Infernal Love and in 1998 with Semi-Detached.
Since then, they have changed labels, released some more records, but most importantly have never given up playing good rock music for their fans, with a live show honed over countless road dates and festival appearances.
Therapy?’s first recording for new label Amazing Record Co., Disquiet is 11 tracks of charged, in-your-face, bruisingly melodic punk/metal. A sequel of sorts to the band’s million-selling 1994 album, Troublegum, it’s by turns confrontational, challenging, vengeful and venomous, a visceral and utterly compelling document of a confident band operating at the peak of their powers. Produced by Tom Dalgety (Royal Blood/Band of Skulls/Turbowolf) at Blast studios in Newcastle-upon-Tyne and featuring cover art by long time collaborator Nigel Rolfe (Troublegum, Suicide Pact You First, A Brief Crack Of Light), it’s both the most accessible record Therapy? have made in two decades, and a reaffirmation of their healthy respect for noise, chaos and unsettling psychodrama.
Disquiet is Therapy? at their sharpest and most focussed, a weighty, undeniably powerful and emotionally affecting body of work which both builds upon the band’s acclaimed catalogue and opens up new creative horizons. Updating the angst-filledTroublegum story with searing honesty and no little wit, it’s a fascinating, bold and belligerent set of modern rock anthems which stands toe-to-toe with the finest albums in the Therapy? canon.