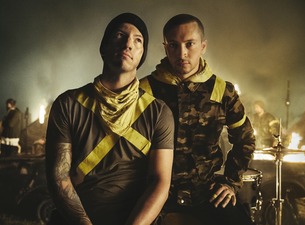 This past summer Twenty One Pilots’ announced that their 2013 LP VESSEL achieved a Gold & Platinum milestone with every individual track from the album receiving Gold, Platinum or Multi-Platinum certification from the RIAA.  Twenty One Pilots’ 2015 LP BLURRYFACE was the first album of the digital era to achieve this feat back in 2018, making the duo from the first artist / group with two albums to reach this landmark achievement. BLURRYFACE spent nine weeks at the top of the Rock Albums Chart and a total of 234 weeks on the chart overall, making it Billboard’s Number One Rock Album of the Decade.
Twenty One Pilots’ acclaimed new LP TRENCH, made a stunning global impact upon release with the RIAA gold certified collection earning the GRAMMY® Award winning duo of Tyler Joseph and Josh Dun their biggest sales week ever in the U.S., with 175,000 units sold in its first week. A true global phenomenon amassing 110 Million streams worldwide in its first week, TRENCH earned Twenty One Pilots Top 5 chart debuts around the globe including the U.S., U.K., Belgium, Canada, Finland, Germany, Ireland, Italy, Norway, Scotland, and Sweden, with #1 debuts in Australia, New Zealand, and The Netherlands.