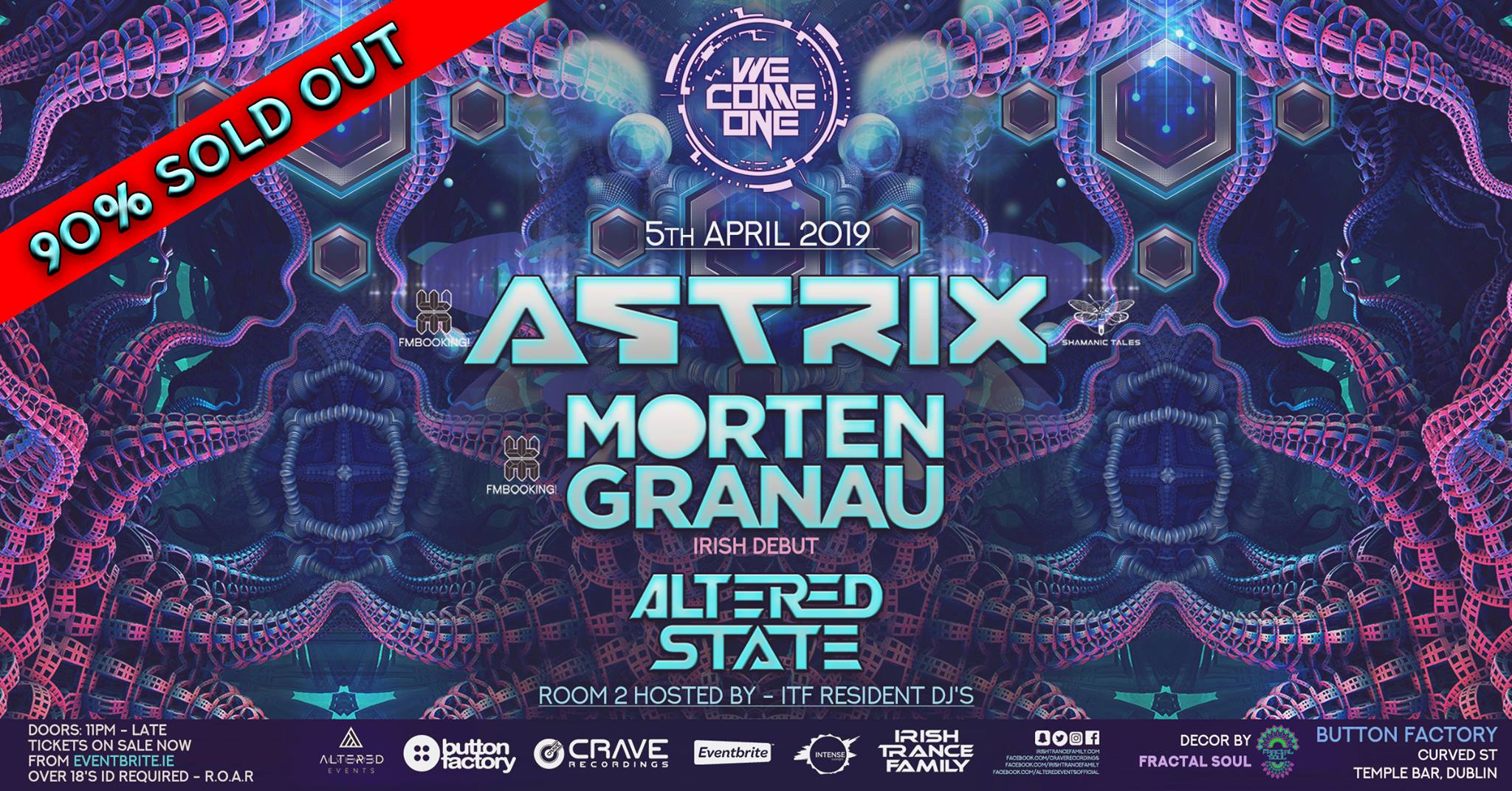 We Come One proudly presents.
Astrix
Morten Granau (Irish Debut)
Altered State
Plus Room 2 hosted by Irish Trance Family with Resident Djs,
Dean Brennan
Leon Clarke / Zondervan
Niall Dunne
Paul Walsh
Ger Sheehan
***FULL LAZER & VISUAL SHOW***
***C02 CANNONS***
***UV PSYCHDELIC DECOR*** By: Fractal SOUL Décor
***PRE-PARTY & DRINK PROMOS***
Early Bird Tickets: €25 +bf (Limited Availability)
General Admission Tickets: €30 +bf
PRE PARTY @ THE MEZZ TEMPLE BAR FROM 19:30 – 22:30 WITH DJS:
Dj Fernanda D’Avila
Albert Forde (Futurá Music)
Richard Heffernan and
Aaron Culleton
In Association with
Irish Trance Family, Crave Recordings, Altered Events & Intense Clubnight
ASTRIX:
Astrix has been one of the leading trance producers and DJs in the world for more than a decade, carrying his musical message of psychedelic emotional uplifting trance to every corner of the world, to the biggest urban clubs and far away beaches, huge festivals and underground events. Devoted to his art and a true perfectionist, Astrix is known for his massive hypnotic explosive sets on the dancefloor and for his precise detailed production in the studio. Both always laced with tons of feel and musicality. His music has been topping the charts and his albums are considered milestones.
MORTEN GRANAU:
Morten Granau cuts his teeth on Trance music. DJing and producing already at a barely legal age, the young man from Copenhagen today is held to be one of the most up-and-coming talents of the lively Danish scene, a youthful and highly dynamic source of pumping Progressive grooves. It is 2001 when 13-year old Morten discovers the realm of ‘adult pleasures’ – one of the most fascinating ones being Psytrance. Instantly hooked he starts creating own tracks on his computer, also he gets into DJing. At the age of only 15 he is setting on fire the floors at legendary local clubs of his hometown. Morten Granau’s production style is varied and hard to pinpoint. There is a very deep and psychedelic touch of classic Progressive Trance to it, but also a modern feeling of clubby funkiness. Together with his good friend Phaxe he gains first attention with the track “The Grudge”, released under the duo’s project name High & Mighty. The title that marks a turning point in his solo career is “The Way Life Should Be” which gains great international feedback when being published in 2008. The increasing popularity of Morten’s entertaining grooves makes him a welcome guest at parties and festivals around the world. Besides releasing high-quality Progressive Trance under his civic name and creating progressive and deep house tracks as High & Mighty, the young go-getter is also known as the One Man Orchestra which stands for melodic Minimal Techno and Deephouse.
ALTERED STATE:
David Sheehan a.k.a Altered State is a well apprised Dublin based Dj and producer. He is highly considered ar the forefront of the Irish Psy trance scene, this being purely based on his ample talents as both an entertainer and a producer.
Altered State has tracks released on Iboga Recrods, Iono-Music, Furthur Progressions, Yellow Sunshine Explosion, Digital Nature Records, Audioload Music, Pharmacy Music & more.
He also is the head of A&R for the Australian based psytrance label Critical Overload, where he will collectively oversee the artistic development of recording artists and talent scouting.
Altered State is the ultimate entrenpreneur and the epitome of potential. His genuine dexterity will shed nothing only stardom upon his journey through the great and almighty dance scene of today & is certainly a Dj not to be missed.